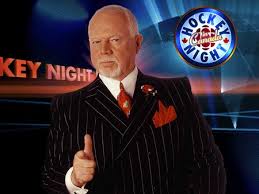 I must admit that when I watch Don Cherry on Coach’s Corner, I don’t immediately think of his spiritual side. But perhaps I’ve been overlooking a little-known aspect of his life.

Quitting school in grade 10, he remembers the day he was laid off as a construction worker, “The jackhammer was my speciality. Strong back, weak mind.” He was embarrassed and humiliated to have to tell his wife Rose and their children that he couldn’t find a job.

Eventually he found a job painting at $2 an hour. He even tried being a car salesman. “I established myself as the worst car salesman in the world,” he later joked.

“I couldn’t seem to do anything right,” he says. As far as he was concerned, he was “a failure at 36 years old. Nothing to look forward to in life.” It was one of his bleakest times.

“One afternoon,” he explains, “I lay down in bed staring at the ceiling, thinking of the mess I’d made of my life. Suddenly something seemed to tell me to get on my knees and ask the Lord to help, which I did. I prayed, ‘Lord, is this it? What am I going to do? I can’t get a job. My life is just one big failure. I am embarrassed to look my wife and kids in the eye.’ ”

The reality was, he hadn’t played in two years. “It would be tough sledding,” he acknowledged.

He called, then visited, the general manager of the Rochester American Hockey Club, Doug Adam.

But he “couldn’t get the feel of the game back. I was doing okay, but it wasn’t there.”

Whenever he was discouraged, he would hear an inner voice, “Keep going.”

“I was back feeling great, playing super, getting picked as a star of the game, top of the world. But black days were coming.” He was understandably heartbroken when he was benched.

Long story short, after a fan attacked Adam, Cherry was made coach, something he knew how to do. “I was born to coach,” he says. The team played terrific, but unfortunately missed the playoffs by a single point. Cherry was fired.

One day, Cherry received a call from one of the nine businessmen who had bought the Rochester Americans, Bob Clarke, asking him to coach.

Without batting an eyelash, Cherry accepted, then offered to be general manager, as well, for the same money, all of $15,000.

“We packed the arena with fans,” Cherry recalls. “The players I had were players nobody wanted, just like me. It was us against the world.” The team won and, he says, “just kept winning. In fact, we were first overall in the league and I was rated Coach of the Year.”

When Cherry was contacted by the Boston Bruins Hockey Club of the NHL and asked to be coach, he jumped at the opportunity.

“I remember my first game behind the Boston bench,” he recalls. “As I looked around at the crowd and out on the ice to see Bobby Orr and all the great Bruins who I was coaching, I thought back to my room in Rochester where I couldn’t get a job sweeping floors and how I asked the Lord for help and to show me the way. I remembered how black and despondent and embarrassed I was. In only three years He pointed the way and I was back on top of the world. In just three years, and they say there is no God. The Lord rescued me in my darkest hour.”

Can’t judge a book by its cover, I suppose.