Bill Rowe is a veritable book-writing machine! His literary output is prodigious.

Pick the genre of your choice: fiction, collected columns, political memoir, public policy, history… There’s something in his oeuvre for every reading taste.

I haven’t yet finished reading his 2015 book, The True Confessions of a Badly Misunderstood Dog, as much as I want to. I am a shameless dog lover, who has laughed and wept over my pets. I once read John Grogan’s Marley & Me, but my eyes were blinded by tears, and I vowed to never again read such a heartbreaker. After having lost two dogs, can I bear reading what I think might be another tearjerker about a four-legged animal?

But I can and do read about two-legged animals, especially those of the political stripe. Bill Rowe is my favourite guide to recent politics in Newfoundland and Labrador. He whetted my appetite with titles like Danny William: The War With Ottawa, Danny Williams: Please Come Back, The Premiers Joey and Frank, No Punches Pulled: The Premiers Peckford, Wells, & Tobin, and now… 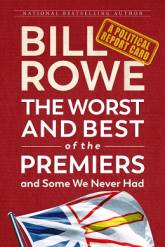 The Worst and Best of the Premiers and Some We Never Had is, as the subtitle suggests, “a political report card.”

How should Newfoundland and Labrador’s political leaders during the nearly seventy years of Confederation be graded? Bill set for himself a demanding assignment, grading some forty-two individuals who led the various Parties into a provincial general election, ranging from a high of 85% (a tie between Joseph Smallwood and John Crosbie) to a low of 20% (a tie between Jim Higgins and Gus Duffy).

While Bill strove for objectivity – is objectivity even possible? – the marks he assigned reflect his personal likes and dislikes. Readers will quibble with some of his grades.

As I read, I wondered about where on the scale between 0% to 100% Bill himself would be placed. Lo and betide, when I reached page 77, I read these words, “if I had qualified for a ranking here, I would have placed myself, based on the gap between what I had aspired to achieve and what I actually achieved, at the lower end of the scale.”

I would give Bill full marks for writing the way he did, with what he calls his “brutal frankness” and “‘warts and all’ approach.” Admittedly, it may not help him to, in the words of Dale Carnegie, “win friends and influence people,” especially those about whom he writes, but it makes for entertaining and thoughtful reading.

Following a trip I won to Russia in 1978, I spent a nostalgic hour viewing Peter Ustinov’s Leningrad. Later, William Casselman, writing in Macleans, stated, “This is the Leningrad of Peter Ustinov. Not mine, not yours perhaps, but his alone – quirky, flawed, riveting.” I don’t know about the quirky and flawed part, but Bill’s book is definitely riveting.

The Worst and Best of the Premiers and Some We Never Had is published by Flanker Press.