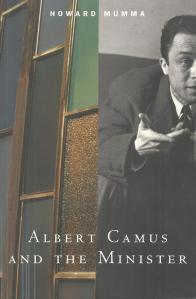 Intrigued by the philosophy and theology of the guest preacher, Howard E. Mumma (1909-2004), Camus invited him to lunch…and a surprising friendship developed.

Through the ensuing years, Camus explored the Christian faith with Mumma, in discussions that offer a deeply personal side of the philosopher previously unseen by the public eye.

Over their first lunch, Camus confided in Mumma his secondary reason for attending church: “I am searching for something I do not have, something I’m not sure I can even define.”

Camus shared his personal story…the death of his father when Camus was one year old, being raised by his mother and aunt in abject poverty, suffering with tuberculosis as a youth, witnessing the atrocities of Hitler as an adult.

“This is why,” Camus confessed, “I am always on the verge of denying that life has any meaning or that the existence of a Supreme Bring could bring meaning to this world…. When it comes to man’s most basic questions of meaning and purpose, the universe is silent…. In a word, our very existence is absurd…. For me, the only response was to commit…intellectual or physical suicide, or to embrace Nihilism…. I am a disillusioned and exhausted man. I have lost faith, lost hope…. Is it any wonder that, at my age, I am looking for something to believe in?…. It is impossible to live a life without meaning.”

It suddenly dawned on Mumma: Camus, “the wearied existentialist,” was a soul searcher who desperately desired to experience faith.

During their chats, the duo discussed the problem of evil, conscience, imago deo, sin. Mumma gave Camus a Bible, and he was excited by its stories.

One day toward the end of Mumma’s summer in Paris, Camus asked him an unusual question, “Do you perform baptisms?”

Camus asked the significance of this rite.

Mumma later wrote that Camus “seemed more than merely curious, rather contemplative, as if this question was more personal to him.”

They discussed Nicodemus, but Camus could not grasp Jesus’ statement, “You must be born again.” Mumma defined the term for his friend: “It is to receive forgiveness because you have asked God to forgive you of all past sins, so that the guilt, the concerns, and the mistakes that we have made in the past are forgiven and the slate is truly wiped clean.”

Camus focused on Mumma and, with tears in his eyes, admitted, “Howard, I am ready. I want this. This is what I want to commit my life to.”

Mumma rejoiced that Camus had reached a moment of existential decision. Yet, the minister said, “Perhaps, you are not quite ready…. Let’s wait while you continue your studies.”

Later, Mumma thought to himself, I’ve always believed that no one is beyond the reach of God. Still, all this seems too incredible to accept.

Soon after, Mumma returned to his American home.

“I remember the evening when the news brought word of his death,” Howard Mumma recalled. “I was shocked, unable to move…. This was a man I knew well…. When I thought again of Albert Camus’ last request of me, I sank a little lower.

“I wondered again if I had made a mistake in not honouring his request.

“It is plain to me,” Mumma continued, “that despite how hard I tried, I failed Campus, and the consequences were tragic.”

Some years later, when Mumma was again in Paris, he was driven on a countryside road. The driver pointed out where Camus was killed in a car accident. As Mumma stared transfixed at the spot, he lamented his “failure to restore faith in my friend, Albert, at least enough faith to stave off what to me was obviously suicide.”