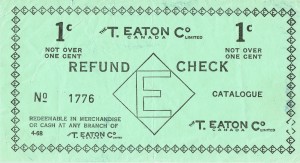 A sample of an Eaton’s refund check

Timothy Eaton owes my late father twenty-two cents. Rereading the previous sentence, I realize I should qualify my statement. Technically, the founder of the T. Eaton Co. Limited doesn’t owe Dad anything, as the entrepreneur died in 1907 and my father wasn’t born until 1915. Instead, the now-defunct department store Eaton founded is in debt to Dad. Please allow me to explain how this scenario unfolded.

After Dad died, my siblings and I went through his personal effects, among which were two refund checks from Eaton’s.

Refund check No. 46021 is in the amount of two cents. According to a notice on the slip of yellow paper, “this check will be accepted as money on a future purchase.” The amount was payable on demand to the bearer in cash or merchandise at the Eaton’s office in Moncton, NB. Refund check No. 49844 is for twenty cents. Two cents plus twenty cents equal twenty-two cents, the amount Eaton’s owes my father.

According to the publisher of Joy L. Santink’s book, Timothy Eaton and the Rise of his Department Store, “In 1869, when Timothy Eaton opened his small dry goods store on Yonge Street in Toronto, the term ‘department store’ was unknown in North America and in Europe. By the 1890s, the phrase had entered the language. In Canada, the single biggest factor in that change was Eaton himself, an Irish immigrant with little formal education. Twenty years after it opened, his Toronto store was unquestionably the largest and most successful department store in Canada.”

Eaton was not one to ignore what the University of Toronto Press calls “new demands on the retail industry.” He succeeded by making full use of “competitive and sometimes hostile markets as tools, rather than obstacles, in his search for sales.” The introduction in 1884 of a mail-order catalogue helped to turn his business into Canada’s largest department store. He later referred to the catalogue as “the cheapest possible traveller and one that could be placed in the field by the thousands.”

Imagine my surprise when I read the following in Santink’s book: “The quality of service [of the mail-order department] ranked with that offered in the store. Each order was acknowledged by return post with information regarding possible delays or substitutions of stock and the proposed method of transit. Since orders were filled solely on a cash basis, the card or letter notified the customer of discrepancies in funds, no matter how small, and requested remittance of the necessary sum. In the case of overpayment,…no matter how small the amount, printed refund checks in denominations from $0.01 to $5.00 were forwarded, to be either applied to future purchases or exchanged for cash at the store.”

Which reminded me, of course, of the two refund checks from Eaton’s which my father had in his safe deposit box. I wish now I had asked him about the circumstances surrounding these checks. What did he order? Where was he living at the time? Why did he overpay? When did he receive the refund checks? Why did he hold on to them? Why didn’t he redeem them? What would twenty-two cents have meant to him? Twenty-two cents may be a negligible amount of money today, but perhaps it  would have been welcome in the days when, as Dad often put it, Newfoundlanders on the dole, or able-bodied relief, received six cents a day.